I am taking a break from moving (which, can I just say, IS THE HARDEST THING I HAVE EVER DONE EXCEPT THIS NEXT THING I’M GOING TO TALK ABOUT) to bring you a very important PSA for everyone who doesn’t watch Downton Abbey and isn’t already freaked out about it.

A year ago today Buddy was six days old, and I was pretty sure I was dying. Or at least, I was pretty certain I wanted to die, because I couldn’t imagine living one more night like I had been feeling. Since the baby was born, I’d been feeling pretty awful. But it was my first pregnancy, so I figured I was supposed to be feeling like that. It was also historically the hardest annual day in our marriage, so I figured that had something to do with it. And the whole newborn baby thing- that’s stressful, right?

Then the nausea started. So much nausea. I literally could not sleep for even five minutes for two nights because of the nausea, and I threw up all night so violently that I introduced a lot of other complications that I won’t write about here because blood and ickniness but, hey, it made me call the doctor. My head felt like it was in a vice. It was horrible.

This morning, a year ago, I got scared by the actually innocuous bloody and ickiness stuff, and called my doctor. She was remarkably blase about the whole hemorrhaging thing, but asked, “Do you have a headache?”

“Okay, you should probably get the emergency room as soon as possible.”

Turns out I had undiagnosed postpartum preeclampsia- yes, the same thing that killed Lady Sybil on Downton Abbey (the crowning achievement of my life- being diagnosed with the same disease as Lady Sybil. And my master’s degree.)

(Oh, and what I thought was a pinched nerve in my back from holding the baby weirdly was actually the beginning of seizures of my heart muscle. Oh. Good.)

I’m not trying to be dramatic, really. I was fine after a course of magnesium and rest, and I know enough now to be proactive in any possible future pregnancies (which will most likely demand bedrest in the case of any hypertension because I don’t produce the protein that they usually use to diagnose you.)

But my doctors (and I’m guessing a lot of doctors out there) didn’t mention ANYTHING about this. I was discharged from the hospital and told not to use tampons for six weeks. Okay. Awesome. Nothing about swelling (my EYELIDS were swollen) nausea, headache, all the minor problems that Buddy had that probably were related to the preeclampsia- nothing. Just no sex and no tampons.

So. Pregnant women or women who are thinking about becoming pregnant- STAND UP FOR YOURSELVES. If you’re nauseated, or sick, or HAVE A HEADACHE tell somebody. Or if you’re stupidly discharged with incredibly high blood pressure (for you) MAKE THEM KEEP YOU.

And seriously- swelling. I know labor is hard, but you are not supposed to look like this: 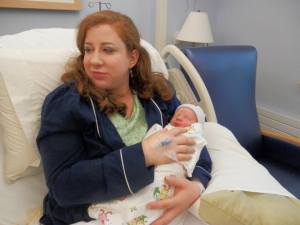 AND CALL YOUR DOCTOR.

(Also, no tampons for six weeks.)

(That’s apparently the most important part.)

There was an error retrieving images from Instagram. An attempt will be remade in a few minutes.